You are here: Home / About / About Treecrops

The Association’s Beginning and Goals

The New Zealand Tree Crops Association (NZTCA) grew out of a philosophy of seeking and sharing information about the many and varied types of trees we might grow in New Zealand to produce a useful crop, be it for humankind or animals.

The Association had its beginnings in 1974 when a group of far-sighted enthusiasts in Canterbury were so convinced of the vast, untapped potential for growing useful trees in New Zealand, that they formed themselves into a small association. Later the same year, they and others of like mind met in Nelson and formally established the New Zealand Tree Crops Association Inc. 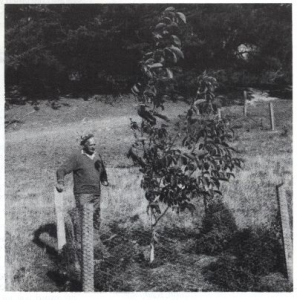 Nurseryman Clarry Jones beside one of the walnuts in an early trial at Orton Bradley Park near Christchurch.

The initial tree crops goals of these visionary farmers, scientists and gardeners was simple: farmers should plant more trees in their paddocks — not just for aesthetic reasons or to supplement their income, but to develop a more stable environment.

If farmers could be persuaded to establish a gentle landscape of shelter and windbreaks, woodlots, orchards, fodder crops and mixed associations of all kinds of trees and useful plants, then those farmers would benefit from enhanced pasture production through the combined effect of leaf litter, shelter and nitrogen provided by the judicious use of nitrogen-fixing tree species.

As well, the combined effects of soil and water conservation, increased bird and bee population, and the revitalizing of our much-polluted atmosphere would vitally enrich the land. Other benefits would be an increase in the quality and diversity of fruits, nuts and timbers and their many useful by-products — in sum, an enrichment of all our lives by pursuing our tree crops goals.

Those original idealists were much ahead of their time. NZTCA members have quietly been at the forefront of research and innovation in developing new forms of productive land use. Membership has spread throughout New Zealand, and we have become an Association of gardeners, householders, orchardists, farmers, smallholders, scientists and researchers.

Branch Structure of Our Association

To make it more convenient to arrange local activities the Association is divided into local Branches, each of which enjoys a high degree of autonomy and independence.

Where Branches are not currently active, we attempt to service those areas from neighbouring Branches, but would welcome the establishment of Branch Committees. If you happen to be in one of these areas, and are prepared to assist in the formation of a Branch Committee, please contact the National Secretary.

Committees guide the various branches, with a national “Management Committee” (MC) serving the interests of all branches and any other committees which may be active from time to time. MC is guided by our Constitution founding document, and an Annual General Meeting usually held during our annual Conference as it moves between host branch regions.

Constitution and By Laws