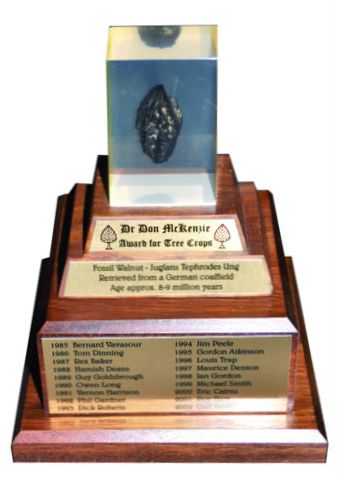 This award is named in honour of the late Dr Don McKenzie, who died tragically in a motor car accident in 1988.

Dr Don as he was known to many, was one of the founding members of the Association and worked for the Department of Scientific and Industrial Research.  His interests ranged over a great number of different crops, but his special interest was apples, and his contribution to that industry was considerable.  The ‘connoisseur’ apples that are now grown by apple lovers throughout New Zealand are a collection of Dr Don’s old-time favourites.

The trophy is a walnut dug from a ‘brown’ coalfield in what was formerly West Germany.  It is thought to be between 8 and 9 million years old and was presented to Dr Don in 1983 when he attended a World Seminar in Germany.  He in turn donated it to the Association.

Now mounted in an epoxy block, this handsome trophy is awarded annually to a member who has made a ‘significant contribution to Tree Crops.’

Gratitude must also be paid to the support teams of all the above – the long-serving spouses, partners, families and friends who make our gains achievable – thank you.

Benefits of Joining
Joining – to become a member of NZTCA 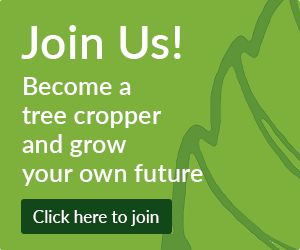