Huge congratulations to the committee for organising the NZTCA National Conference held at Wesley College 22nd – 24th April. Thanks go to Heather Douglas, Joan Leitch, Val Pearce, Keith Dixon, John Allen and Virginia Warren for all their time and effort in making the conference a success. Also thank you to Bron & John Fergusson for manning the produce stand at the conference. We had a great response from members donating fruit, jams, chutneys, plants etc. Thanks also to all the people that helped in all sorts of ways during the conference. 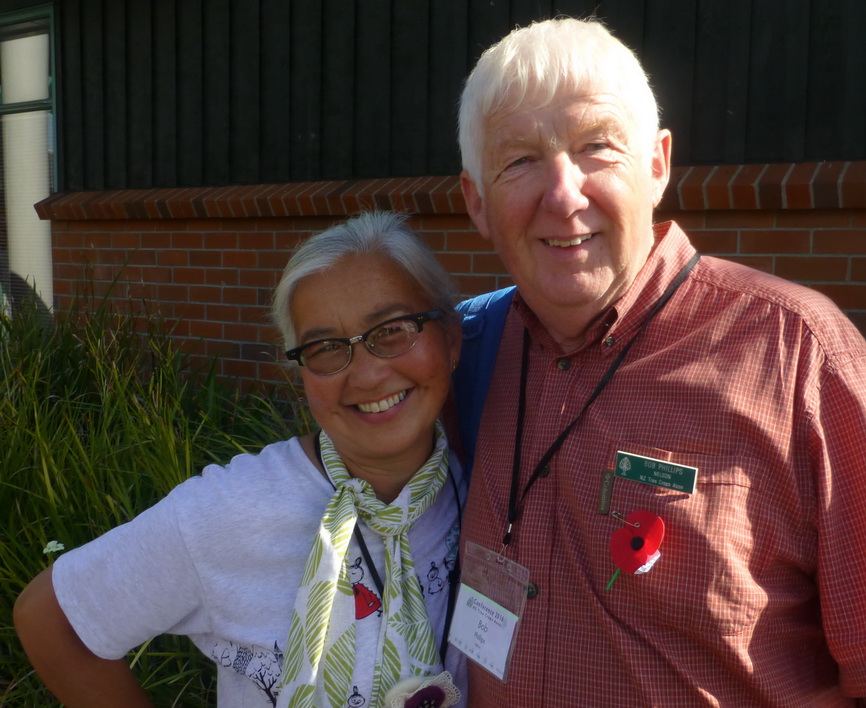 The 2016 Conference is now over – it was a busy few days. I would like to say a BIG THANK YOU to the organising committee, for each person’s magnificent efforts which culminated in a successful event. Also to all those who helped by donating their time, plants, produce and by joining us for the weekend. We also had Bob Phillips, (our newly elected President) trying to get members to part with money in the Auction. Thank you to everyone from every branch who joined us and it was great to catch up with old friends and make new ones.

Wesley College was a good venue with plenty of space under one roof for our various Speakers, many Exhibitor’s and plenty of room for our breaks and lunches. They put on an excellent set up and meal for the Saturday formal dinner which was highlighted by Lynda Hallinan’s after dinner speech, which was humorous and pithy.

All of the Speakers were received well and many gave us much to think about and discuss. There will be more information on them in the next Tree Cropper magazine and we had some excellent comments from attendees at the time.

The Field trips did show Franklin as the Special place we all think it is and by Sunday our fellow Tree Croppers had been to visit just some of our favourite places.

Conference 2017 will be held in New Plymouth, 31 March to 2 April 2017, at the Quality Hotel New Plymouth. Their title of “New Horizons’ follows well I think from Franklin: Fertility…Food…Future, and we definitely showcased all three. 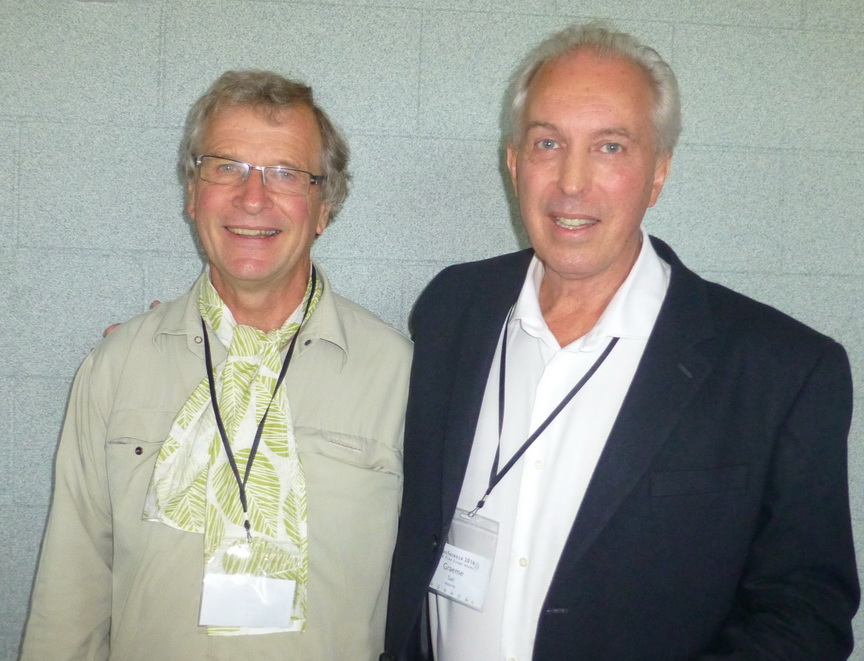 Graham Sait (right) with John Allen of the Franklin Branch

This seminar focused on the need for carbon sequestration on a scale that can only be achieved by the whole world together to preempt the imminent demise of our globally interrelated organism, planet earth.

Along comes Mycorrhizal Fungi, a small creature that burrows into plant roots and effectively expands the plant’s root area tenfold by mining minerals and gives them to the plant in exchange for glucose. It retains water and produces bio-chemicals that stimulate the plants immune system. Further, it produces a sticky substance called Glomalin which instigates the formation of Humus.

Commercial agriculture denudes the earth of Humus, destroys the life in soils and is incredibly toxic in our environment.

He sees us tree croppers as being uniquely placed to bring about this change. Will we accept his challenge?

A major recent project of Franklin branch has been establishing a demonstration food forest on an old orchard at the Pukekohe High School. Although newly planted there is already clear sign of the multilayered productive gardens to come.

As the area is set up as a school and community education project there are on-site constructions such as the Hugel Mound – effectively a raised bed in which logs are buried to eventually provide a habitat for soil microbes, provide nutrients, warmth and drainage for crops.

Also on site are working examples of different methods of Biochar production, including a cone pit, consisting of an open pit ranging from an outer diameter of 6ft reducing to a diameter of 2ft, to permit combusting without flame, as well as enclosed drum types designed to burn wood and foliage in a limited oxygen environment.
Biochar production dates back thousands of years to pre-Colombian deposits of dark fertile soil, very rich in phosphates (called tierra prieta de indio) found in South America. It is postulated that biochar, being extremely stable, will keep carbon as well as other nutrients, such as phosphates, locked in soil for thousands of years. Being very porous and with a negative charge, biochar works both to hold plant nutrients (generally positively charged eg K, Mg, P) and to provide habitat for beneficial soil microbes and mycorrhiza.

There are wide ranging opinions on the differing production methods of biochar. Ideally organic waste materials such as sugar cane residue, corncobs, nutshells would be the source for biochar production, but demand may exceed supply raising the question of growing crops to provide material to produce biochar. Ideally, biochar could be seen as a way to mitigate climate change, stopping carbon leaving soil as carbon dioxide into the atmosphere.

For further reading; The NZ Biochar Research at Massey University has more information, as does Cornell University (Johannes Lehman). There are also many sites describing small scale biochar production for the home orchard.