Home/Archives/NZTCA – Our official logo
Previous
Next

Branches were asked to submit a proposed design for National Logo.
Copy of any design was to be in the hands of Management Committee by 18 June 1982.

Copy of their chosen logo was to be enclosed, together with suggested colours for use if required.

Selection of a logo involved considerable thought and discussion- about 30 designs were considered. They (MC) tried to chose a design that was not too elaborate for reproduction on a small scale, (eg badges, ties) but also suitable for larger reproduction (T Shirts).

They had to choose a design that, hopefully, would not be confused with, or too similar to anyone else’s logo.  The varied facets of Tree Crop interests (multi-tier, fruits, nuts, fodder, amenity etc) led to an abstract design rather than one of a specific nut or fruit.

The design thus depicts a leaf, a tree – and the three circles represent produce of the tree and/or representing Tree Crops involvement in agriculture, silviculture and horticulture (and possible indicative of the debts of the prospective Tree Cropper?)

The colours selected were green for the main part of leaf/tree, brown for the trunk and yellow circles.  [This monochrome version is in dark green.  Does anyone have the colour version please?]

Later these were reproduced on items such as ties by the Canterbury Branch, T-shirts – Auckland, stickers by Central Otago and name badges by Nelson.  Mailbox signs were also made and these have come in handy for quick signs for Field Days by attaching to an electric fence standard.

It is interesting to note today which of these products are still in use, while other have become rather obsolete…. like neck-ties!  A more recent use is for the NZTCA Web site so it is now easily seen by people around the world.

Notepaper was printed with a plain green logo.

For this effort which has now been in use for over 30 years the Waikato Branch designer was paid $50 – who was it?  Please use the Reply box below if you can enlighten us.

Canterbury Branch undertook the manufacture of “Parisian” ties of blue and maroon with the logo. Original cost $11.50 but reduced to $10.50 in 1985.  (The header above is a band scanned from a blue tie, the blue being a little dark to highlight our logo.
Does anyone know how many were made?)

Auckland Branch had the T shirts made. Beige tree crops logo on the front with green lettering “Nuts to you” on the back.

Other interesting versions of logo and usage 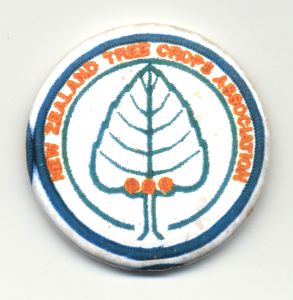 This badge may have been an earlier attempt at a logo. 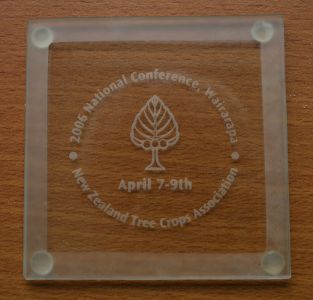 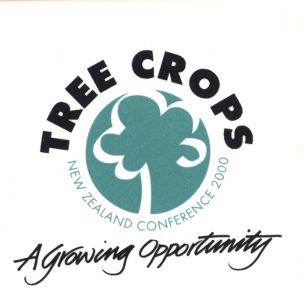 A brief controversial departure from our official logo