This blogletter is a bit different. With the objective of keeping in touch with other growers who are coping with different climates, this offering is mainly reactions to quite a difficult season, admittedly it would have been better as a true blog in real time.

Thanks for the tales of disaster. I just thought that I would cheer up those North by my spring experience.
I have only ~30 young trees, mainly seedlings. I thought that things were looking up last year when I got a couple of buckets of good nuts and looked forward to progressive increase.
We had a brilliant early spring[and for that matter a great summer and autumn] Unfortunately on the 5th of November-although Guy Fawkes night never impressed me you had to hand it to him for trying-we had an air frost bowing off Antarctica of -4.5C.Next day all walnut foliage turned black
This year’s harvest is easy to calculate-6[rather nice] walnuts from one tree.
Is this tree worth propagating as frost resistant?
Regards, Ian Stewart, Queenstown

Thanks Ian,
Definitely watch this tree. When you get enough nuts, (20+) do a crackout. Or send me the nuts and I’ll do one for you. If you are planting seedlings it could be one to sow nuts from at least.

Thanks for your comments. It is what I was hoping for from this blog. We all live in different climates and no-one knows what is happening around the country unless we tell each other.

All the best, nick

Hew McKellar – have read your newsletter, just a note, took black walnut seeds ex John Dead to Peter Arthur, otherwise known as touchwood books, he has some very interesting trees on his place. Well worth a visit if you are that way. Nothing to do with walnuts but  I.D.S. visited McKean pinetum, he was asking why the monkey puzzles there are not happy, I had noticed but no one came up with a reason, Has anyone got an answer?

Thanks Hew.
Worth a try.
Peter has been very helpful to me. He sent me some unsolicited Juglans sgillata seed the other day.
All the best, nick

A question for Andy and Karen Philpott, Nick:
I have heard of Gypsum being used to improve the structure of poorly drained clay soils, but not Dolomite.  Has the use of Dolomite for this purpose been well researched?
Gypsum is now being produced as a building waste byproduct, from plasterboard.  It may be cheaper than other sources.  Maybe there is a building site near you with Gib. offcuts in the skip?  Free!
Cheers, NicK Empson

Good one Nick,
I had not spotted that in their email. I have used old gibboard from our house renovations amongst our walnuts to good effect. Apparently the calcium travels through the soil much further as gypsum than as lime. I have not heard how dolomite behaves. I remember reading of an experiment in a Lucerne paddock where they were trying to rectify an acid subsoil to enable the Lucerne roots to grow deeper. The gypsum was much more effective.
nick

Hi, & thanks for pointing out my gaff, Nick, I actually meant to write gypsum , so that’ll teach me not to proof read my emails before sending them!
We have applied gypsum to select trees at the moment as those ones are looking a bit sad, however we will be applying this to all the trees ultimately.
We have several areas where runoff from sheds etc can make the trees a bit wet so we may end up ripping some drain lines in when the ground softens.
Andy and Karen

Thanks for the blog letter. Sounds like the weather has been kinder here just North of the Waimakariri, as we think our crop has been slightly better than last year, and we think quality slightly improved although we will know better when we get the final verdict from the Lawrences. Last year was our first real harvest at just over 300kg. This year we avoided fussing over the early falling nuts, and just chucked the whole lot out. Rats and mice not a major problem so far. We have tried to keep on top of harvesting every two days so as not to encourage them.
One problem we had last year and I thought I had solved by pruning off lower branches was how far a heavy crop weighs down the branches. We had quite a few ended up dragging on the ground, and one broken branch by the weight of nuts. A real hassle for mowing under. Further pruning planned for this winter.
One other issue which I work on  from time to time is patches of diseased bark on an otherwise healthy tree. Difficult to spot, typically some cracking in the bark, and maybe a slight sap ooze. On cutting open, it’s black and the bark is clearly past useful. No mention of this in the Walnut Manual, and I have assumed its  a manifestation of blight. Don’t know, but I seem to have success in dealing with it by cutting back to good bark and wood and spraying for a while with a fungicide. It does not then seem to recur in that spot.
Cheers, Simon Collin

I did point out to Colin at the time that walnuts bleed when pruned in winter. In the Bay of Plenty I find late December to late May the suitable time to prune.

Dear Nick
Meant to get back to you after last Walnut Blog regarding our harvest in Central Otago – basically it was “bad news“ because on November 4th last year we had a severe air frost which badly hit the trees just as they were starting to bud . Rex were hit worst and buds and leaves were burnt up to 3 metres above ground – whereas Franquettes hadn’t budded and were unscathed .
Our resultant harvest is only about 20 % of the last few years . Strangely Rex’s in our upper orchard which is about 50 metres higher were virtually untouched.
So after a summer of mainly vegetative growth I am hoping for something spectacular next harvest , I refuse to believe that nature will be unkind enough to send two consecutive years frosts !
Very best wishes, Jeffrey A Feint

We’ve just returned from an extended trip to Morocco and U.K. hence the slow response to your last Blogletter.

This year our harvest was down by about 70 %.
Reasons not determined because although we had a wetter spring and summer than average in North Canterbury,
we didn’t suffer the mists, winds and other adverse weather you experienced.

I was very interested in the photos and comments from Tony Sigmund.
We experienced exactly the same situation with our crop and his photo mirrors our own findings.
Each morning we would discover clean and almost un-damaged empty half shells lying all around the tree.

We questioned whether it might be possums or rats. We ruled out dogs as we feel we would have seen them and our neighbours only have trained and restrained farm dogs.
Our area is pretty free of possums – not having seen one for over 10 years –
so we concluded it was rats. I fixed some rat baits in the vicinity of the trees and they were nibbled on a couple of nights.

Be interested to hear if you receive other reposes to this as we may then be able to act in advance of harvest next year.

All the best
Tony Walker

Nick
I am thinking now it maybe a bit difficult to compare each others damage.
I ‘m not sure if you have Meyric, but this nut is so much easier to split open than all the others, hence it can be opened cleanly without any requirement to chomp at the end of it.
I am still unsure on who the culprit is – still leaning towards rats.
I have a rat bait station close to where all the action is, but not a nibble on the usually tasty bait. If it’s not rats then I presume it’s possums.
I heard another possibility the other day. Hedgehogs.
I did not find out how they eat the nut, but these people certainly saw an increase in their activity at night.
The main area where all my broken shells and shell halves is next to a jungle – great place for rats or possums to live.
On other scattered parts of the orchard I do find clean half shells, so this makes me think its rats rather than possums – unless that’s the hedgehogs!
Next year I must make the effort to go down and observe at night and see what is going on.
Tony

Typical rat damage on a walnut: 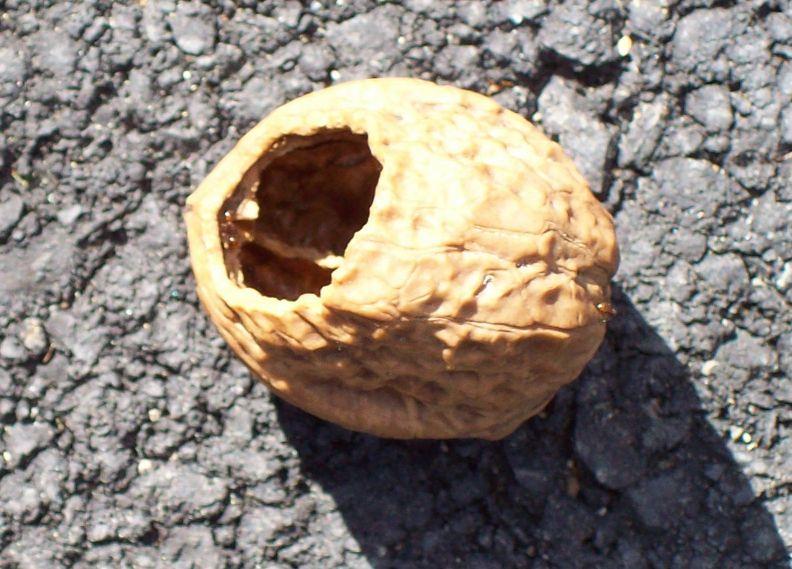