This from Paul Devine;

Thank you for your blog and also for your walnut action group facebook site.  I really appreciated seeing what others are doing for harvesting.  I am currently in the process of developing a harvester that I hope will be ready for this coming harvest.  It is only a concept currently, though I am working with an engineer on the plans…

Regarding the holes in the walnuts, I had a consultant indicate to me that he thought we had a boron deficiency causing the problem.  However in our case the leaf test showed boron to be in the low normal range for walnuts and further I also found that whether we had holes in the nuts and if so the size of them varied from year to year.   From our experience the wetter the season the more holes and the bigger they were.  I can’t explain why, I just give this as an observation.  I was a member of the NZ Walnut Industry Group committee for a few years and nobody on that committee at the time was aware of what the cause for holes in the shell were.

Have read the bits about what I think is called eutrophication, i.e. overloading with organic matter, as a general rule bury dead animals outside the drip line of trees, make the tree go looking for the food, this way it extends its root system, my gut reaction to adding such as grey water to the soil, it should be no more than 10% of the rainfall, otherwise you can have problems.

Some input from here… (Clive Marsh is conducting a site monitoring experiment in Canterbury):

1)       Flowering is all happening.. see below for this season’s dates

2)       Frost. 12 Oct10 was a ‘near miss’ we think.  Recorded -0.8°C for 1~2hrs at 1.3m but stayed just above 0°C at 4m.  data from sensors in Stevenson screens.  Have sensors in 3 blocks in orchard and at nearby Broadfield AWS (station 17603 on www.cliflo.org.nz).  Not quite cold enough to freeze tissues in most places.. at 6.30am (coldest time of night) there was ice on trees but also liquid water so hadn’t all frozen at that stage.  Data will be written up for NZWIG

a.       Does anybody have good data on what level is deficient.. we have 20~25ppm (late Jan leaf test) but no ‘very obvious’ signs of deficiency.  Applying Zinc foliar sprays with mankocide (standard blight management) seems sensible.. but there is a cost and ‘rumours’ of phytotoxic effects… does anybody have any experience/data/wisdom?

Our walnut leaf analysis at Cheddar Valley in BOP, admittedly 20 years ago, but still valid, showed a range of 19 to 34 (av.24) ppm over six plots. Our pecans show no obvious zinc deficiency symptoms, even though that species is very sensitive to zinc levels. But some of our citrus do show zinc deficiency, and will not fruit without soil and foliar zinc feeds. I have not had any noticeable response to zinc from my walnuts. Just the same, because the citrus are short, I add zinc to my walnut fertilizer anyway just in case.

The plots where I got these zinc foliar levels from did show an interesting thing about walnut nutrition. All the plots got my usual fertilizer application (at the time, of Urea plus Superphosphate), but half got an extra dose of Urea two months later. The plots with the extra Nitrogen grew less than the control, and the leaf analysis showed why. The plant responding to the Nitrogen, demanded even more of the other minor nutrients, which made them even more limiting. The Magnesium readings in particular dropped significantly.

As a result, my approach to walnut nutrition is that, the better fed they are, the more attention I pay to the overall balance. This is borne out by my pig poo experiment I described in the last blogletter. So now, as a matter of course, I add Magnesium, Manganese, Zinc, Boron, and Iron. I add the iron because it is meant to aid the uptake of magnesium, or so I am told.

Has anyone else done foliar analysis on their walnut leaves that they can share with us?

Tony Walker sent in this photo of his walnut trees. There were more, and they can be seen on my Facebook page, under ‘Pruning’ photos. 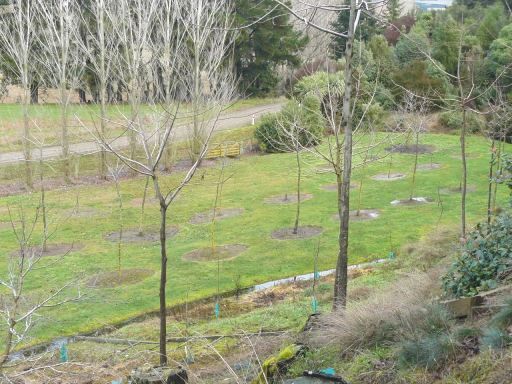 We are at the top end of Marshmans Road about 10kms inland from Amberley, just north of the Kowai River.

We have about 85 walnut trees, mainly planted between 1999 and 2003 but with a few blanks since then.

All the development we have done here has been with future generations in mind, recognising that few of the thousands of trees we have planted will reach their best potential during our lifetime.

So it was with the walnuts. Although we have been totally un-scientific about their selection we wanted to produce some walnuts for consumption and the majority for good timber in future years! None of the common walnuts are named varieties and all, including the black walnuts, were obtained from Woodend Nurseries .

Basically we are pruning both types to a clear height of 3.4 -3.6 metres as they reach an appropriate height, and waiting to see what happens next!

The first common nuts were produced in 2009 and the first nuts on the Black trees came this year.

Generally I prune in June, whether all the leaves have dropped or not. One year I did it in late August but didn’t like the amount of ‘bleeding’ from the cuts.

>QUERY: dear sirs
>im the manager of a dried fruits importing company.For  march 2011
>Im planning to visit New Zealand walnut growers for buying.
>I would really aprriciate if you could guide me to get into contact
>to walnut suppliers.
>best regards
>volkan aksoy

A major reason for doing this blogletter is to help people find out what the industry is doing, and that includes products and services that are available. We need to know about walnut nurseries, equipment suppliers, cracking plants, or walnut buyers (as above). I make no recommendation about any of their products or their authenticity.

Most walnut growers know about the beneficial effects from eating walnuts because of their high Omega-3 content. But the other day, Anna Brenmuhl, sent out this article to members of the WIG committee, as it contains significant new information.

A new clinical study shows that substituting walnuts for mono-unsaturated fat in a Mediterranean diet improves, and even restores, endothelial function (the property of arteries to dilate in order to meet an increased demand of blood, for instance due to a physical effort). Walnuts also reduce harmful cell adhesion molecules which are associated with atherosclerosis, commonly known as hardening of the arteries. These dual effects enhance the circulatory system, therefore aiding in the prevention of heart disease.

The study concludes that the results provide further support for the inclusion of walnuts in healthy diets. “This is the first time a whole food, not its isolated components, has shown this beneficial effect on vascular health,” according to Emilio Ros, M.D., the Hospital Clinic of Barcelona, researcher who directed the study at the setting of the Institute of Biomedical Research August Pi i Sunyer (IDIBAPS). Dr. Ros notes, “Compared with the Mediterranean diet, the walnut diet increased endothelium-dependent vasodilation by 64 percent [my emphasis] and reduced levels of vascular cell adhesion molecule-1 by 20 percent. In addition, as in previous studies, the walnut diet decreased total cholesterol and LDL cholesterol.”

Anna kindly told me the website this came from, www.21food.com , where I also found the following, which I never heard before;

Walnuts happen to be a wealthy plant source of omega-3s, the fatty acids also located inside cold water fish like salmon. Omega-3s are known to decrease the threat associated with a host of health issues from depressive disorders to heart disease. Walnuts are also crammed with gamma tocopherol (a type of vitamin E), phytochemicals also known as as polyphenols, as well as antioxidants. So now, for the first time, experts have documented that these nutrient-rich nuts provide the capability to help diminish the size as well as advancement connected with prostate cancer.

Researchers from the University of California-Davis just revealed their finding at the 239th National Meeting of the American Chemical Society (ACS), being held in San Francisco this week.

On a more anecdotal level; my wife, Pauline, heard a nutritionist on the radio the other day, saying that you should not eat more than 30gms of nuts per day. That is quite a lot, but we need to hear that because we tend to binge on them a bit in our house.

Notes from our place

My reaction to the email from Clive Marsh about bud burst times was, “What practical use is this to me?” But as the season has progressed, I came to realise that I should be taking more notice of bud burst times. Up in the Bay of Plenty we may not have a problem with out of season frosts, but the winter weather (or rather lack of it) has had a pronounced impact. Lack of winter chilling has resulted in a very hesitant leafing out. Early varieties like Serr, have leafed out as normal, but late varieties like Franquette have been very late and variable throughout the tree. Some branches would be in full leaf with quite large nuts, while other parts of the tree would have buds just starting to burst. It will be interesting to see what effect this has on the nut crop.