I have just come up for air at the end of a fairly intense walnut harvest. The wet weather concentrated the nut fall, which was a good thing, but it meant that we had to be extra conscientious about getting the nuts in off the wet ground. So top of the priority list is get this blogletter away as your contributions need to see the light of day.

The feedback I am getting is that this has been a bumper harvest. There will be some losses from the excessive rain during harvest itself, and from blight caused by the wet summer. Even so there are record quantities of walnuts packed away in peoples sheds this year. I cannot get over how different every season is. We have been living on this property for over 30 years, and picking up walnuts for sale for at least 10 years, and each year is a complete surprise. There does not seem to be such a thing as a normal weather pattern.

With all that wet weather, watching our lawn grow uncontrollably, I was wondering how growers collecting off a grass sward were getting on.  Before the season started I had a conversation with Diana Loader about the merits of spraying versus mowing. She commented that she was going to do a pre harvest Roundup spray as it was too hard to mow and pick up nuts at the same time. How does everyone else handle their orchard floor? We have no choice because this place is too steep. We have to spray. The adverse side effect is erosion with no weed cover, though the tree roots do a pretty good job of holding the soil even during a downpour. A new phenomenon for us has been during torrential rain we have our own version of liquefaction and the nuts embed themselves in ground when they come down. That does slow down harvest a tad.

I would be interested in people’s experience with codlin moth and other insect pests. We have not had a problem (yet) with codlin moth. I credit the population of feral chooks, together with Californian quail and pheasants that I built up to large numbers by feeding out all our reject walnuts all winter. But I thought this letter from a friend could be good backstop.

Just a point of interest, I make codlin moths traps and put them in my walnut trees.
The traps get really full, and I do have to fill them again.
I do this about August. [In BOP. You may be later further South] It does take time, and we do have 30 bearing walnut trees, and some coming on.
The hardest thing is getting the 1 litre milk bottles to use for the trap.

Recipe is as follows
1 litre water
2 Tablespoons of vinegar ( I use malt )
2 Tablespoons of Treacle
Heat enough water to dissolve the treacle
Put into a 1 litre milk bottle
With holes drilled into the top
Hang in walnut tree, they say as high as you can
but too hard for me to carry a ladder so I just put it as high as I can reach

I mix up batches of 10 litres at a time, great for all fruit trees the Codlin moth attacks.
Elaine Brown.

Elaine tells me that she has used this for a number of years with good effect. In the BOP Tree Crops Newsletter there was follow-up from the article in the Issue 63 TreeCropper magazine (Sept 2010) giving this recipe (more-or-less). There, Wayne from Tauranga, said he had had good success with it on his apples and pears. The Editor, Gayle Couch writes she lost around 90% of her apples to the moth larvae last year, but this year using the vinegar and treacle trap only around 10% of the crop was damaged.

Tony Sigmund has alerted me to a walnut disease that I was not aware of. Looking at the information, I would be very surprised if it is not widespread within the country. I reckon we have been confusing it with blight in some cases. It is a fungal disease that looks very like bacterial blight, and is probably controlled by copper sprays in the same way, so is unlikely to change the way we operate.

At the start of the season – just after all those thousands of walnuts appear, a lot of the walnuts start turning brown at the end of the nut. When opened up, the inside is mushy, light brown in colour and going rotten. Some walnut just shrivel up and fall off but most have a brown patch at the end of nut and the outer skin can split open like a piece of paper that has been scorched to a light tan colour. Early in the season, even though the walnuts don’t look too bad from the outside, the inside is going rotten.

The difference from walnut blight is that it is earlier and the inside of nut is a funny colour rather than black and shrivelled. We should be aware, however, we may have walnut blight as well.

I came across a good web site– which I have attached.
There are several other web sites that give a description – not in simple language, as most are experiments etc.
They all say it is a disease that has a very similar appearances and characteristics to walnut blight.

As it is a fungus we may have to do a bit more copper spraying – the same as for blight. 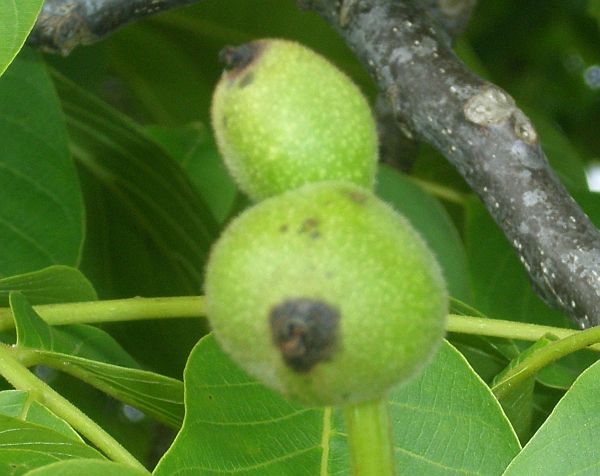 In the early stages BAN looks just like this.

Those of you who know me, will be aware that I see walnut timber as the real crop; the nuts being a useful by-product. Here are some excerpts from a series of emails with my friend Peter Arthur, who farms in the Hawkes Bay.

>> QUERY: Dear Nick, I have about 100 acres of steep papa gorges with gorse,

>> blackberry, goats and some deer.Kowhai, rangiora, kanuka, manuka, hoheria.
>> I am thinking of making up seed bombs  using walnut, oak, kahikatea, rimu,
>> chestnuts etc and hurling them into gorse/blackberry bushes. The idea is
>> to have birds, rats, mice eventually spread the seed from any trees  that
>> may sprout and survive. Country is too steep for harvesting pines. Do you
>> think it could work? Peter

The only way you can know if that is going to work is to try it. (And then
tell us what happened!) My personal approach on fairly similar country is to plant quite large trees (walnuts only of course) into lines cut in the scrub. nick

>
> Dear Nick,
> Many thanks for your reply . In a way I am already trying it , or doing it
> by mistake–I have oaks, walnuts and chestnuts  popping up  anywhere
> there is no stock , or where the stock can’t get at them –ie in a
> blackberry bush
> I have also been reading about continuous cover forestry–Ian Barton,
> plus “The Woodland Way” which I haven’t finished but have sold .
> You are growing your walnuts for both timber and nuts–have you
> selected strains  for the amount of black heartwood ?
> Years aho I helped a Dutch bloke who was buying walnut trees–
> Juglans regia–for gun stocks. He was using an increment borer to
> determine amount of black heart wood, which was what he wanted ,
> and what he was buying.
> This is 20 years ago at least and he was paying $2000 for a ‘good’
> tree-roots and all.
> I am being a bit Irish in this project–years ago I got a sack of black
> walnut seed from Proseed  and in October roved round the gorges
> which a grubber , pocketsfull of walnuts, and a knapsack sprayer full of
> round up or may have been Caraguard. Anyway I grubbed a hole,
> dropped in 3 nuts, sprayed and departed . Strike rate was excellent
> but goats and deer ate the lot .
> So the Irish bit is using the beloved blackberry and gorse to be of
> assistance  rather than the bloody pest it is . Using one pest to defeat
> another?
> Peter

Very interesting Peter.
One of the advantages of European walnut is that not many things will
eat the trees. Horses are the worst. We have frequent invasions by the
neighbour’s goats and they only have the odd nibble. The worst
problem with goats is that they eat my labels!

I am a bit concerned about the lack of heartwood. I keep a lookout for
it when thinning to waste and it is conspicuous by its absence, even in
30 year old trees. When it does start to happen I guess that will be one more
thing to select for. I have trees from so many different origins that I cannot
believe that none of them would have black heartwood if it were just a
genetic problem.

You might look at totara. I hear that they are planting totara up in
Northland on rough farmland because stock will not touch it and they
do not have to fence them out. You could use European walnut and totara in
the clear patches to get a more even forest cover.

I look forward to showing you around. If you just call in unannounced
you may find it a bit hard to find me. Pauline sent a couple of Swiss blokes
up the back to find me, in our car, a couple of months ago. They came
back ages later having failed to find me, terrified, as they had never driven off tar
seal before. nick

>>Dear Nick,
Interesting  about goats being more interested in the labels  than
European walnuts . I have some seedlings by the bookshed which I
will transplant in the gorge and see what happens.
Interesting about stock not touching totara–I remember talking to a
sheep farmer from Taranaki whose worst problem was rimu springing
up in his paddocks–nothing would eat it and the needles made the
most terrible mess of the wool.
Regards Peter

By the way I am not the only person trying to grow European walnuts for timber. There is a very interesting project at the EarthTrust (Used to be the Northmoor Trust) in the UK, which you can look up on www.earthtrust.org.uk

Now I must go down to the local hospital and get those webs I grew between my toes in all that wet weather, removed.